We are a point of focus for faculty, student and community interests in the lives, languages, history and culture of Muslim and Arabic-speaking peoples world wide.

Our major is a special emphasis within the general Social Science curriculum. It is multidisciplinary in focus, designed to provide an effective understanding of the religions, languages, cultures, economies, politics, and histories of Muslim-majority societies and their diasporas.

Our minor is designed for students specializing in other fields, brings together an interesting and enriching combination of courses in Political Science, Religious Studies, History, and Language.

Learn more about our courses.

Learn more about our faculty.

Learn more about our faculty research projects and publications.

Join us for our lecturer series each semester.

Center for Islamic and Arabic Studies

The center’s study of the Islamic world focuses on the global context in which Islam emerged historically, the cultures and societies that it helped shape, most especially in Eurasia and Africa, and the current global condition in which people in the Islamic world situate them-selves today. It sees the Arabic language as the cultural medium for diverse ways of life that are of world historical significance.

Founded in 2000, the center is multi-disciplinary and includes in its scope of study the Arabic and Persian languages and literatures; the history of Muslim and Arabic-speaking peoples; political, economic,and social dynamics of contemporary societies; art and architecture; social, political, religious, and philosophic thought; and the experience of Muslim communities in the United States and around the world.

The Center’s goals are

to develop and sustain a state of the art curriculum in Islamic and Arabic Studies at SDSU.
to organize outreach activities and programs that help educate the San Diego community at large
to engage in scholarly research in the national and international arenas.

Salim and Francoise Shah have been avid supporters of the Center for Islamic and Arabic Studies since its founding in 2000. They held fundraisers in their home and found community support, which made it possible to establish the center. The goal was to create not only an academic program but a hub for community outreach.

Their recent gift to CIAS continues the family’s legacy of support.  “As we approach the 20th anniversary of the center’s founding, we saw it fit to expedite the pledged gift to be given now rather than from the estate. Also, in the current polarized environment with rampant Islamophobia, it’s important for people to have a chance to hear an objective source for truth,” said Salim Shah.

Read the full story about the Shah Family. 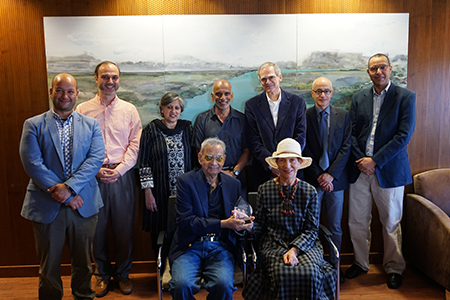