We invite all members of SDSU and the San Diego Community to a discussion by Professor Ahmet Kuru for his new book: Islam, Authoritarianism, and Underdevelopment.

Co-sponsored with the Department of Political Science 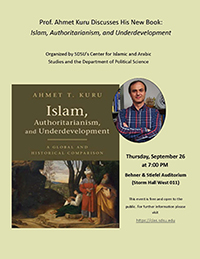 Islam and Democracy in Indonesia: Citizenship and Populist Challenge

A panel discussion with

A film screening of 1948: CREATION AND CATASTROPHE (A documentary about the Israeli/Palestinian conflict)
April 12, Thursday, 7.00pm
Little Theater (LT 161)

A Talk by Dr. Nadine Naber

A Talk by Dr. Gary Fields

Professor in the Communication Department, University of California, San Diego The author of Enclosure: Palestinian Landscapes in a Historical Mirror

A Talk by Dr. Ebrahim Moosa

Professor of Islamic Studies at the University of Notre Dame
The author of Ghazali and the Poetics of Imagination, and What Is a Madrasa?

Co-sponsored by the Department of Political Science

Women PeaceMakers program documents the stories and best practices of women leaders and grassroots activists who bravely challenge extremism, violence and inequality on the frontlines of conflict around the world.

Respondents: Dr. Norma Bouchard, Dean of the College of Arts and Letters and Dr. Nancy Marlin, Provost Emerita and Professor of Psychology.

The discussion will address the contested issue of migration in Europe, the Mediterranean and the U.S./Mexico Border as well as the current Syrian refugee crisis through the lens of art and activism.

Sponsors: The Common Experience, The College of Arts and Letters, The Circolo italiano, The School of Public Affairs, SDSU Arts Alive.

Co-sponsors: The Center for Arabic and Islamic Studies, The Department of European Studies, ISCOR, The Italian Studies Program

Amara Lakhous is the author of the award-winning novel Clash of Civilization for an Elevator in Piazza Vittorio (2008) and several other books, including Divorce Islamic Style (2012) and Dispute over a very Italian Piglet (2014). After receiving death threats, he left Algeria for Italy in 1995 where he with immigrants and refugees for several years. He writes in Arabic and Italian and his novels have been translated in many languages.

Kinda Hibrawi is an acclaimed Syrian American artist, creative strategist and program director. She has worked on various art projects with the U.S. State Department, Children’s Hospital of Orange County, UNRWA and UNICEF. She co-founded and helped develop Karam Foundation’s Innovative Education programs, which she jointly ran every six months for displaced Syrian refugees on the Syrian-Turkish border from 2013 until December 2015.

Tarek Masoud is the Sultan of Oman Associate Professor of International Relations at Harvard University's John F. Kennedy School of Government. His research focuses on the role of religion in the Muslim world's political development. He is the author of Counting Islam: Religion, Class, and Elections in Egypt (Cambridge University Press, 2014).

Co-sponsored by the Department of Political Science

Dr. Yuval Evri is a faculty member at the Mandel School for Educational Leadership in the Hebrew University of Jerusalem. He is a sociologist and culture researcher who focuses on the intellectual and political history of the Land of Israel/Palestine. Among his interests are the unique dissenting perspective of Israel's Jewish population from Northern Africa and the Middle East.

Islam and the Challenge of Pluralism in the 21st Century
March 2, Wednesday at 7.00pm
Storm Hall West (SHW) 012

A talk by Dr. John Esposito

Dr. Esposito is Professor of International Affairs and Islamic Studies, and the Founding Director of the Center for Muslim-Christian Understanding at Georgetown University, as well as the author or editor of about 45 books and encyclopedias.

His talk will ask questions including:

Why and how has fear of Islam become normalized in popular culture?

What role have mass/social media and political elections played?

Who are American Muslims?

What are American attitudes towards Islam?

A Panel Discussion with:

Currently Professor of History and Archaeology at the American University of Beirut (AUB), Dr. Peter Dorman is a humanist and an international leader in the study of the ancient Near East, in particular the field of Egyptology, in which he is a noted historiographer, epigrapher and philologist. He is the author and editor of several major books and many articles on the study of ancient Egypt and is probably best known for his historical work on the reign of Hatshepsut and the Amarna period.

He completed his undergraduate studies at Amherst (BA, 1970) and his graduate work at the University of Chicago (PhD, 1985). An accomplished academic leader and administrator, before coming to AUB he chaired with great success the distinguished Department of Near Eastern Languages and Civilizations at the University of Chicago. Previously, he spent nine years (1988-1997) heading the epigraphic efforts at Chicago House in Luxor, Egypt. From 1977 to 1988, he worked in curatorial positions in the Department of Egyptian Art at the Metropolitan Museum in New York.

In July 2008, Peter Dorman became the 15th president of AUB and for seven years led the university in a major expansion of its medical center, invigorated interdisciplinary research across the institution, and initiated the university’s most ambitious fundraising campaign. Founded in 1866, AUB is a private, independent, non-sectarian, non-profit institution of higher learning located in Lebanon’s capital city under a charter from the State of New York. AUB bases its educational philosophy, standards, and practices on the American liberal arts model of higher education. A teaching-centered research university, AUB has around 700 instructional faculty, a student body of around 8,000 students, and currently offers more than 120 programs leading to the bachelor's, master's, MD, and PhD degrees.

Avoiding War and Nuclear Armageddon in the Middle East: Iran, Israel, and Regional Unrest
November 17, 7-8.30 PM
Arts and Letters 101
With By Trita Parsi

Trita Parsi is the 2010 recipient of the $200,000 Grawemeyer Award for Ideas Improving World Order. He is an award-wining author of two books, Treacherous Alliance - The Secret Dealings of Israel, Iran and the US (Yale University Press, 2007) and A Single Roll of the Dice - Obama's Diplomacy with Iran (Yale University Press, 2012). Treacherous Alliance won the Grawemeyer award and Council of Foreign Relations Arthur Ross Award in 2008 (Silver medallion). A Single Roll of the Dice was selected as The Best Book on The Middle East in 2012 by Foreign Affairs. Dr. Parsi is the President of the largest Iranian-American grassroots organization in the US, the National Iranian American Council and has taught at Johns Hopkins University and George Washington University. He currently teaches at the Edmund A. Walsh School of Foreign Service at Georgetown University in Washington DC.

Presented by Dr. Rabab Abdulhadi and Dr. Simona Sharoni. Dr. Abdulhadi is an Associate Professor of Ethnic Studies/Race and Resistance Studies and the Senior Scholar of the Arab and Muslim Ethnicities and Diasporas Initiative, at the College of Ethnic Studies, San Francisco State University. She is a contributor to Jadaliyya and the co-editor of Arab and Arab American Feminisms: Gender, Violence and Belonging.

Dr. Sharoni is Professor of Gender & Women's Study at State University of New York (Plattsburgh). An internationally known feminist scholar, researcher, and activist, she the author of Gender and the Israeli-Palestinian Conflict: The Politics of Women's Resistance. Other publications can be found on her website: www.simonasharoni.com

Dr. Hashemi is an Associate Professor at the Josef Korbel School of International Studies and the Director of the Center for Middle East Studies at the University of Denver. He is an expert on the Middle East and Islamic affairs.

Dr. Hashemi is the author of Islam, Secularism, and Liberal Democracy: The Syria Dilemma (with Danny Postel, MIT Press, 2013), Toward a Democratic Theory for Muslim Societies (Oxford University Press, 2012) and The People Reloaded: The Green Movement and the Struggle for Iran's Future (with Danny Postel, Melville House, 2011).

The Prospects for Peace in the Holy Land
November 19, 6-8 PM
Physical Sciences 130

Presented by Dr. William B. Quandt: Dr. Quandt served on the National Security Council for the Nixon and Carter Administrations. He actively participated in the 1978-79 Israel-Egypt Camp David accords. Dr. Quandt was also a senior fellow in the Foreign Policy Studies Program at the Brookings Institution. He is presently professor emeritus at University of Virginia. Dr. Quandt has authored multiple books, including the landmark diplomatic study, Peace Process: American Diplomacy and the Arab-Israeli Conflict Since 1967 (Brookings Institution Press, multiple editions).

“What’s in a Name? ‘Arabs’ and Race in the American Diaspora”

We are thrilled to have renowned expert Dr. Sarah Gualtieri in town for this special guest lecture. Dr.Gualtieri is professor of History and the director of the Middle East Studies program at USC. She has also recently published the well received book: Between Arab and White: Race and Ethnicity in the Early Syrian American Diaspora. This discussion promises to look not only at the history of racial identity in the Arab American community, but also at more recent developments as well as the cultural and political significance of Arab racial identity in the United States. We should have ample time for questions for what promises to be a very interesting discussion. We do hope that you will be able to join us.

A Forum on Syria and Intervention
October 8, 7-9 PM
Hepner Hall 130